Stretton Parish Council were approached by a local resident, Miss June Kirkland, to recognise some of the old footpaths and their names and erect signage of the names.  Miss Kirkland wished to fund and donate the signage to the Stretton parish.

To accompany the signs and the enquiries made, Miss Kirkland has kindly written some background notes : 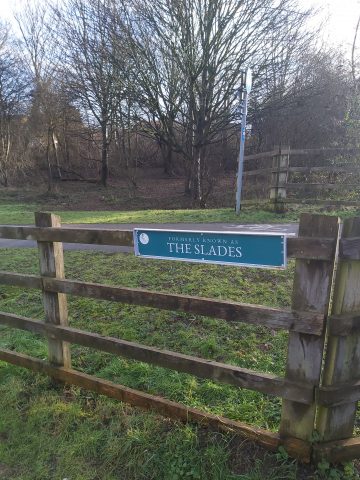 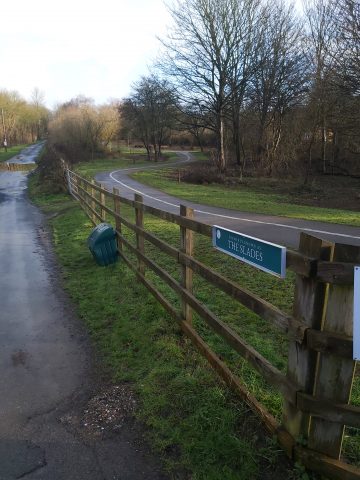 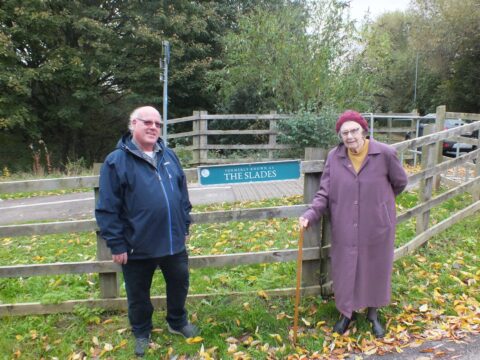 In general, this was thought of as beginning off the old Hillfield Lane, where there is now a footpath sign more or less opposite the slate factory.

The by-pass bridge was not there in those days, it was a grassy cart track, more or less level until it reached a field gate and stile where there is now the entrance to the RSPCA field.

The cart track had a gravel pit on the right (now silted up and the site of Stretton Woodlands).

My mother told me that before the site was sold for gravel working it belonged to Bridge Farm and was, for some years, the Stretton Cricket Field (1920’s).  On the left of the track was Stretton Allotments – level with the track in the area which is now the bypass.

What is now the RSPCA field was the real “Slades”.  The word “Slades” or “Slad” means a damp place.   Laurie Lee’s early autobiography “Cider with Rosie” mentions that he and his family lived in a village named “Slad” in Gloucestershire.

Our “Slades” was a damp field running towards the canal.  It sloped very slightly towards the middle, this area always being damp.

It was a good area for Ladysmock flowers every Spring.

Along the hedge running alongside the allotments there was a very deep ditch (or could possibly have been a stream) which always held water.   I think this must have been the place where one of my contempories tells me he used to pinch watercress to sell in Burton Market. 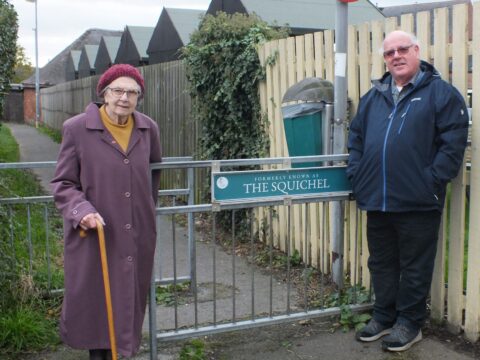 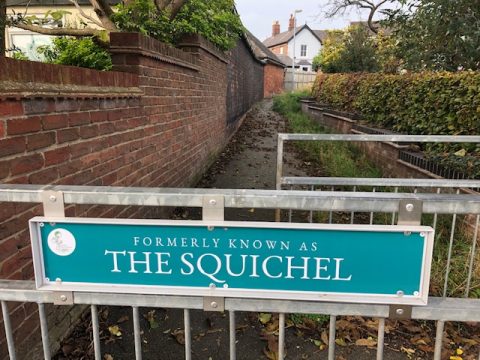 I have never seen this written down but presume this is how it is spelt.  Though if anyone has read my book “Stretton Remembered” you will have noticed that one contributor spelled it “Squtle”.

Being in the middle of the village the sign has been noted.  Two people have commented; one a new resident to Stretton who was interested  and the other an old Strettonian who was inspired to Google the word and go the answer “Do you mean Twitchel, Twetchel, Jitty, Ginnel etc, which are more usual names for this kind of walkway.

However, a cousin of mine, who accompanied me to meet local Historian Charles Underhills W.E.A. local history classes in 1949-50, remembered him saying the name may derive from “Twitch Hill” – twitch being the local name for Squitch grass!

I was talking to another old Strettonian and she also remembered it as The Squichel. 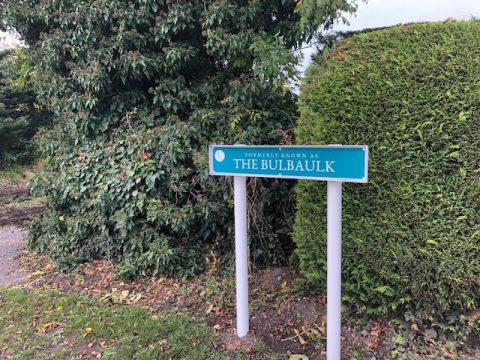 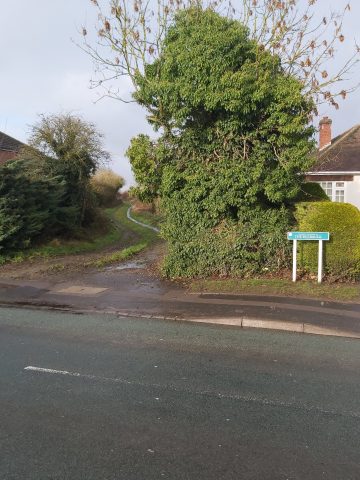 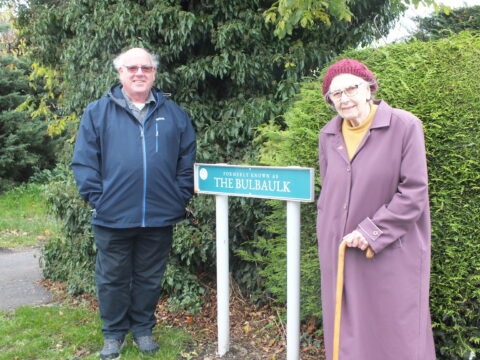 This is a very old word, originating in Saxon times.  When land was cultivated by the 3 Field System the word Baulk was used for the paths leading between and to the fields.

The land leading off Craythorne Road, almost opposite the old golf club was a baulk leading to one of the Rolleston fields.

Richard Stone also explained that due to the ploughing of the fields over many years, and the soil always being turned in the same direction, the baulks gradually became slightly higher than the fields.  I think this higher separation of the fields connects the bulbaulks separating compartments in the holds of ships but this is not verified.

When Stretton had numerous farms, the land on the left of The Bulbaulk belonged to Warren Farm and the fields on the right belonged to Bridge Farm.  There was a pond by each of the two gates in what is now one large field between The Bulbaulk and Craythorne Road.  They have silted up now but were originally filled by drainage from the fields.  After a severe storm many years ago water was seen running off the field, across Craythorne Road and onto Bridge Street to the entrance to Station Walk. The ponds were used by cows for drinking water.

The Stretton Bulbaulk was originally much longer but was diverted (in a useless direction) when the Golf Course was created.  It originally ran to within 2 fields of Cross Farm (Rolleston) then turned at right angles, the gate at the end leading into what was then the last field on Bitham Lane.    This right of way now runs as a combination of roads and walkways from The Belfry to The Fletches on the Athleston Way estate.

Just before the turn, on the right, was a small spinney which was very much enjoyed by children, teenagers and other young people. 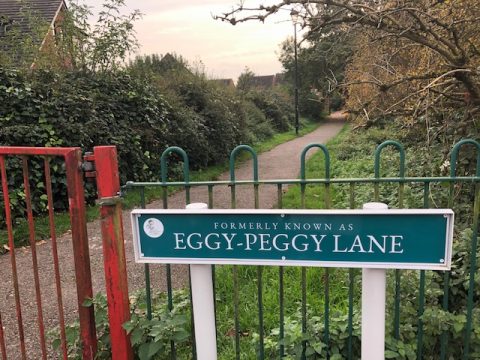 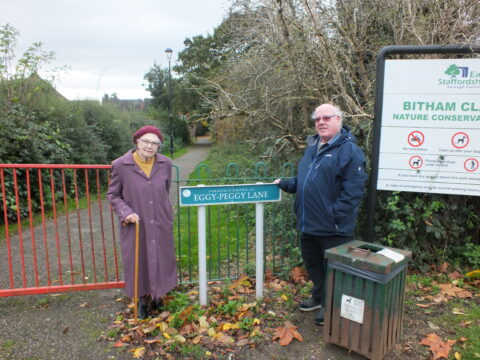 This is the lane leading from Bitham Lane to the field and then onto the back of The de Ferrers Academy.

I am told that in the 1930’s, when Miss Chilton was the Headmistress at Bridge Street School, she was “very free with the cane” and when, knowing there would be a half hay holiday on Shrove Tuesday, Stretton children would sing the traditional thyme :

If you don’t give us a holiday

We’ll all run away

They followed it with the words :

Where shall we run to?

With a great big cane.

The lady who told me this (unfortunately died aged 90 in December 2020) lived all her life in Forge Lane; which is the other end of the village from the Lane and so obviously well known.

The origin of the name is in doubt.  Many people say it is because it was a good place for bird nesting (and collecting eggs which is now illegal) plus the fact that gypsy caravans sometimes parked on the lane to cut wood from the hazel trees to make their traditional clothes pegs to sell in the area.

The lady who told me the rhyme was friendly with a very old amateur historian (whose notes on the history of Claymills are quoted both in my book Stretton Remembered and also in David J Ford’s book The Land of the Dove (published in 1999) and she said that this man had told her that a very old name for the hawthorn tree was the Heg-Peg Tree so (as the hedges were mainly hawthorn and hazel) Eggy Peggy Lane may be a corruption of Heggy Peggy Lane!